When “Thin Ice” dropped this weekend, I read a tweet from Gareth Roberts which made me think the episode would be just as I expected. “Another v good #DoctorWho. We've had that one at least 5 times but who cares when the leads are so watchable and loveable?”

A totally traditional story. It’s early in the season still, and our narrative is still in Bill’s first extended trip in the TARDIS. So it's natural that this will be another fairly straightforward adventure to see how Bill flows on adventures with the Doctor.

Those were my expectations. It’s not a spoiler to say that the story met my expectations. Doctor Who produces stories of consistently solid quality today. But in doing so, went well beyond them. “Thin Ice” is a totally traditional, incidental little story that turns the show’s tradition on its head.

“Thin Ice,” for all those reasons, is a simple, traditional Doctor Who story. Its beats even call back to the early years of Doctor Who itself. So many comedy drunks stumbled into being devoured by an alien in the Pertwee era.

The Doctor infiltrates Sutcliffe’s organic fuel foundry with the Groucho Marxist comedy sarcasm of Patrick Troughton as his twisting insults were always supposed to be.* If the leisurely ominous exploration of “Smile” sampled the Hartnell era’s signature styles, I think the whole season might give us a tour of the classic story beats. 1963-2013.

* If only any writers in the Troughton years were capable of writing with the wit and rhythm of Sarah Dollard. Unfortunately, the best we got was, “Well now I know you’re mad. I just wanted to make sure.”

Alien monster attacks the unsuspecting people of London. Doesn’t get more traditional than that. Bill herself gives voice the the logic of the tradition. She speculates about whether Sutcliffe could be an alien, because it makes sense to her that someone responsible for setting this creature on innocent humans was an alien.

In a moment, the tradition is shattered. Sutcliffe launches into probably the most blatant and explicit rant of aggressive, violent racism that I think has ever been heard in Doctor Who.

We’ve had characters speak elegantly of their contempt for slaves and lower classes. We’ve had complicated metaphors for colonial histories and ideologies baked into entire alien biologies. The most notable one in the Pertwee era, actually. It was called “The Mutants.”

I don’t think we’ve ever had a character on a televised Doctor Who story just blast someone with a flaming vomit of racist verbal abuse. I stand to be corrected, but I think Dollard has hit new ground here.

Yet we’re still in a very traditional story. It’s neo-traditional, but given the length of the Moffat era, we have to admit that the early years of his own tenure now count in the period of Doctor Who’s tradition. Even though he still runs the place.

The template of “The Beast Below” is now a traditional template to introduce a companion. First Amy Pond, and now Bill Potts. Here’s its structure, remarkable in that it achieves complex character development in very little time.

The companion experiences a story that itself is a narrative articulation of the Doctor’s ethic, letting the companion articulate hir own ethic as a creative reaction that complements it. You’ve now given the companion a comparable ethical complexity and profundity in 45 minutes as a character who’s been developing for 54 years.

Moffat was a genius to have thought of it. It’s a beautiful, elegant, and fantastically efficient narrative template for Doctor Who. As a tool for writers, it’s probably the greatest work Moffat has ever produced for Doctor Who.

It must make you feel terribly old to have your own work become a tradition in your own lifetime. Hell, before you’ve ever left your current job.

But what is that ethic? Because it’s different in “Thin Ice” than it was in “The Beast Below.” In their superficial details, Dollard wrote plenty of parallels between the two stories. Starship UK was a dystopian Noah’s Ark in space, a sea creature underneath an ahistorical London.

Now we’re in the real London, a London lampshaded as real. Regency London never had non-whites in the movies Bill watched, but as the Doctor says, “History gets whitewashed.” The Doctor, going far deeper to the heart of a crusty old Brexit-voting grandpa watching at home with the family, declares that even Jesus was black.

Not only do we see the real multi-ethnic London of the 1810s, Doctor Who acknowledges the real erasure of all human complexity in so much of the media we’ve seen depicting our history all our lives.

“The Beast Below” gave the Doctor the ethic of a solemn, kind guardian. He was an ancient soul with a heavy, burdened heart, and an immense kindness. “Thin Ice” gives us a different Doctor.

The character no longer burdened by the years-long weight of the old Time War idea, yes. Most importantly, the Doctor articulates a very different set of ideas about who he is and why he does what he does.

His own speech to Sutcliffe articulates some of the oldest ethical wisdom of humanity. True progress is measured not in factories built or methane emitted, but in how well you treat the least of us.

On screen, the Doctor describes it in modern terms, as how well a society treats those who are least privileged. An open embrace of progressive values. It gives me hope that Doctor Who will continue to embrace social progress and change, even as Brexit drives the BBC and all of English society into a sucking muck of depression, xenophobia, and isolation.

If anything, it means that the BBC know who the largest and most devoted fans of Doctor Who in Britain and around the world are today – nerdy, intellectual, smart women, including many of ethnic minority women in their different countries. You don’t purposely alienate the central fanbase of your biggest global moneymaker show unless you’re a complete idiot.**

** I mean, there are definitely complete idiots working in Britain. But it seems that there are enough non-idiots at BBC Drama to keep at least this much of the country in sane shape.

Those are the values explicitly spoken by Jesus, the values of justice that Britain, as a Christian country, should embrace. Not that it’s anywhere near that. But neither is anywhere else. 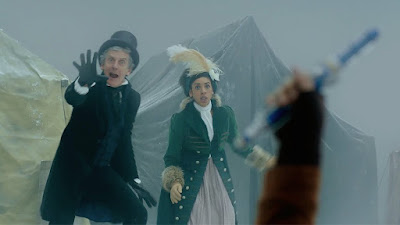 A just world is a world where each of us is treated with equal and total respect. A world where we do no wrong to each other, at all levels from individual insult and theft to systemic scales like an entire planet’s economic system. That’s not just Jesus’ message, but the ethic of the entire Abrahamic way of life.

Genesis 14. Lot’s people graze their animals in other people’s fields, and justify it by Abraham’s message that God promised the land to him. As Abraham’s heir, the land is Lot’s. But the rest of Abraham’s people ask Lot, even though he’s the rightful heir of the promise – “That doesn’t give you the licence to steal from people!”

Even a promise from God doesn’t break our promise to God, which is also our promise to each other. The promise of justice.
• • •
In 1964, David Whitaker, Doctor Who’s first and primal script editor, axed a story called “The Masters of Luxor.” It was axed because, at its core, was a pious expression of fealty to God, and the ethic of the Doctor was a stance of passive wonder at the eternal beauty of the entire universe of space and time.

He replaced it with “The Daleks.” It’s the story that establishes the fundamental ethic of the Doctor, even though it was in its simplest form. It was literally the second story of the whole show, and it was written in a week. Of course it’s simple.

The Doctor fights evil, fights racism and oppression. He fights for justice.
Posted by Adam Riggio at 21:30