Taking a break from the super-intense confrontations with the impossibility of our ideals tonight. You know, when I started this blog, I wanted, in part, for it to be a look at my writing process. But the last post felt like I was rehearsing the manuscript for Utopias.

Let me try to explain what I mean. One of the book’s most important arguments will explore the tension between our ideals and their practical impossibility. It’s the central tragedy of all political aspiration.

Anyone who says they want to do something with their life that has a net positive effect on their community feels this bind. That holds no matter what your own ideals are – religious, progressive, conservative, atheist, and even nationalist.

So if an argument leads me to consider one aspect of that bind – reality’s resistance to our ideals – I’ve gained knowledge of another wrinkle in that concept. And given me another point on the map in relation to the others.
• • •
A couple of months ago, I wrote about my idea for a book about Stanley Kubrick. The director as an example of the fearless materialist with a growing conscience. Well, some of the research arrived. 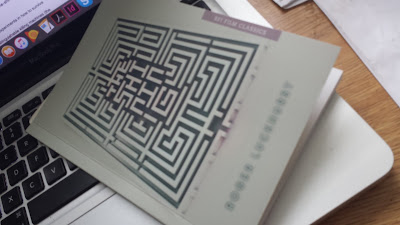 It was a bit of an impulse buy, but I started getting into some commentary from Roger Luckhurst. It’s only a couple of years old, and has plenty of references I can look up on my own later. Since I’m not out to write a book on the ‘current state of Kubrick scholarship’ or anything dry as dirt like that, I’m looking for sources with useful ideas in relation to my own.

He has some ideas about how Kubrick articulates space in his films that I think could be useful. Here’s an example – Luckhurst contrasts how The Shining the book and the film move in space. The book, like traditional gothic literature but set in the late 1970s, has a classical haunted house structure. The secrets and malevolent spirit of the hotel is in the basement – a descent.

But in Kubrick’s movie, the story plays out as a series of mazes. The Overlook Hotel and grounds all play out vertically in the film. Oh, there are multiple floors in the building, there’s an elevator, there’s a staircase. But the camera moves horizontally – Steadicam tracking low to the ground, tracing a path.

Kubrick took a gothic novel and put it on a flat plain. A very violent thing to do to a text, yes. One of the many, interlocking, awkward reasons why Stephen King hated Kubrick’s film. Probably the most subtle.

But the most revealing. A haunted house story has traditionally been a matter of descent into hidden quarters. Most stereotypically, the basement and catacombs under the haunted house (or castle), are where terrible, scandalous family secrets are kept. Quiet corners. Buried as if dead. So as to be mourned and forgotten. Alienated and separated from the living. Now set free.

But Kubrick flattened all that out on one plane. The dead are with us. So is the evil. The evil that we do to each other can never be buried or locked away. To become monstrous is a real human capacity. Even of father to son.

That’s the horror story.
Posted by Adam Riggio at 02:00