Wow. I totally haven't been here in a while. That's because I've been working on my new project, Radical Democrats Radio, a podcast that combines progressive political activism in the (broadly) autonomist and communitarian tradition, with philosophical reflection and analysis. The main website is still under construction, so while you can go there, you won't see much. 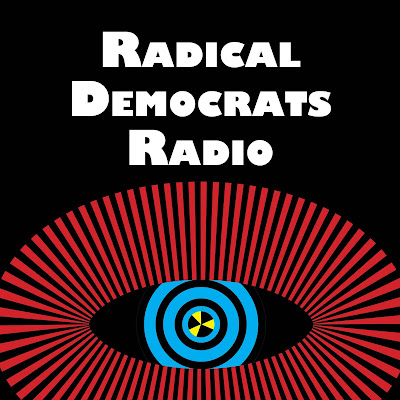 Most episodes will run about 30-40 minutes, and consist of a monologue and an interview. My interviews usually run for 60-90 minutes, and cover a variety of discrete but related topics. So a single sit-down with an interview subject will produce multiple podcasts.

The monologues are rather like my blogs – me talking about different topics. Sometimes, they'll be related to the interviews, sometimes not. Most of the time, I'll contrast the two parts of each show. If the interview leans more philosophical, then the monologue will be more directly political, and the reverse. As for whether the monologue or interview comes first, I'll probably decide that by the tones of both.

I'll also occasionally try out more experimental types of episodes as new ideas occur to me. Best (and only) example so far is my reading + commentary on Jian Ghomeshi's attempted comeback essay in the New York Review of Books. I cut some segments of a few seconds where I stumbled over the occasional word, but I recorded it all in one take.

Here are the most important links for Radical Democrats Radio.

Subscribe! Here's the podcast at iTunes, so you'll get new episodes as I throw them up. This is the best way to access the show, not only because it takes the least effort, but we're still early days, so the publication schedule remains a little sketchy.

We're on SoundCloud too, so you can follow the podcast there.

Support! Here's the Radical Democrats Radio Patreon page, so if you like what you hear after subscribing, you can throw a few dollars (pesos, euros, lira, shekels, rupees, yen) every month. The page's income goals describe key improvements in the production of the show that I'll make as our audience of patrons grows. More rewards will come as patronage grows, and as I think of them.

Finally, here's a transcript from my monologue on the 14 September 2018 show, on the constitutional crisis that Doug Ford's extremist government in Ontario created.
• • •
Notwithstanding Norms

When Doug Ford was elected Premier, I knew he was going to be a jackass, a crap Premier, and probably very destructive and harmful to vulnerable people. I cried on election night for the people I know who are going to suffer from his cuts – efficiencies.

I didn't think he was going to cause a constitutional crisis before Autumn Equinox hit.

What is this constitutional crisis? I’m not going to get into the legal details because I’m not a legal expert. I may have a legal expert on soon, as this mess develops a little more to get some real analysis on what’s going on.

Canada in constitutional crisis, 2018. Brought to you by Deco Labels. Deco! Here at Deco, we make labels.

The notwithstanding clause is the shorthand for Section 33 of Canada’s Charter of Rights and Freedoms. It says that, for situations of incredible danger to the security of the people, a government can overrule particular Charter Rights.

Think of an armed uprising against the government. It’s plausible these days. If Ammon Bundy could occupy an American National Park office for weeks, some fastidious Albertan Three Percenters could set off some organized political violence in Edmonton if the NDP gets re-elected. If there was a clear, present danger, Rachel Notley would be justified in overruling Charter Rights temporarily.

But those suspensions would be rightly temporary – the notwithstanding clause is our constitutional mechanism for emergency rule.

Doug Ford is using this mechanism to pass legislation.

Put to the side Ford’s reasons behind Bill 5, whether you think it would improve or degrade Toronto’s governance. Those aren’t important to the question of Canada’s constitutional nuclear option. What is our nuclear option? The constitutional off-switch on the government’s recognition of its citizens’ basic human rights.

Using the nuclear option to pass legislation makes the suspension of citizens’ basic human rights normal. In this case, the notwithstanding clause suspends the basic human rights of about three million people, with no expiry date.

Even worse than when Pierre Trudeau sent tanks to the streets of Montreal in 1970, Doug Ford’s suspension of Torontonians’ Charter Rights to the exercise of democratic governance has no withdrawal time. Toronto’s electoral districts won’t revert to the map of 47. The change to 25 seats is permanent.

It gets worse. Premier Ford made clear in his initial press conference on Monday that he’d have no problem using the notwithstanding clause whenever there was any substantial opposition to his government’s policies.

That means, he sees the constitutional mechanism that suspends the Charter Rights of Canadian citizens a perfectly ordinary, reasonable thing to do in pursuing a legislative agenda.

I have two fears here. One fear is that Doug Ford legitimately doesn’t know how government works. That’s plausible, and I think true.

As a city councillor, he never appeared at committee meetings. He often said that no work happens in committees. Actually, committee work consists in reading reports, hearing from experts on policy, logistics, and city management, or meeting with community groups about planning city ordinances. Mr Ford has no idea that any of this went on.

In an interview on 11 September, Ford said that he was genuinely shocked that a judge in a constitutional court had the power, on hearing a case regarding some particular laws, to declare laws or legislation unconstitutional.

Ford also often talks as though everything he does while in office is entirely legitimate, proper, and merits no serious opposition. The reason is because he won the election. Winning the election, according to Premier Ford, gives you a mandate.

I think he believes that “having a mandate” means “being able to do whatever you and your core supporters want until the next election.”

Which brings me to my worst fear. That Doug Ford legitimately believes that his job is to use all means required to bring his core supporters’ agenda to fruition as fast as he can. He said on 10 September that he would suspend citizens’ Charter Rights whenever they got in the way of his agenda.

The power to suspend citizens’ Charter Rights can be invoked at any time. Doug Ford did it to pass a municipal governance bill. What prevents Canada’s Charter of Rights and Freedoms from losing all power to regulate Canadians’ relationships with our state, is how terrifying our officials find the prospect of revoking those rights.

Maybe he’s ignorant. Maybe he’s an extremist. I think it’s something of both. Either way, it’s very dangerous.
Posted by Adam Riggio at 06:00 7 comments: