Social contract stuff again today. Because the whole concept of the social contract has been at the centre of Western political theory for literally hundreds of years. As a popular idea, it informs the very act of writing states’ constitutions.

As annoying and constraining the concept can be, it’s not going away, and anyone who wants to write foundational political theory has to grapple with it.

Here’s a common stereotypical way* to describe a social contract: as a thought experiment. “We all know that such a moment could never have existed. But if all the members of a society could have gathered to decide among themselves how they’d live, they would decide that . . .”

* You know where you can find the best examples of sadly common lazy stereotypes about how to describe philosophy? Look up a kind-of-shit Introduction to Philosophy textbook.

But here’s a problem with that image of the social contract concept as a thought experiment. It doesn’t really make clear why we would make the experiment in the first place. 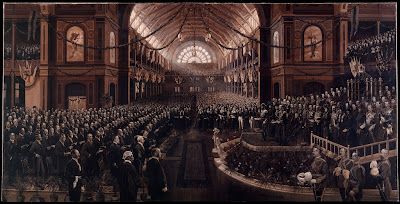 Social contract thought experiments are ostensibly about discovering the fundamental relationships and concerns of society. Depending on the emphasis, it tends either to security (so you lean Hobbes) or productivity in community (so you lean Rousseau).

Yet it rarely works as a means to discover a real essence of politics. It’s an argumentative demonstration, but as an argument, it’s strictly rhetoric. If you’re interested in building a vision of society as fundamentally about mutual security, you’ll work through a social contract experiment that makes it so. Same goes for whatever set of values you want to argue is paramount in society.

That's not to say that social contract thought experiments are useless or poor philosophy. They’re actually great philosophy, but not because they reveal some real essence of society. It’s because thinking through them is an engine of concepts and ideas about fundamental issues of social life and human nature.

You don’t want to get to a right answer that’s so clearly correct that it shuts everyone up and they just memorize it as the perfect answer to the question. You want the best way to encourage thinking.

Now here’s how Immanuel Kant lays it out. He turns it into an example of a technical term in his complex, carefully designed ontology of the human subject – an ideal of pure reason.

How an “ideal of pure reason” works – it’s a framework principle of thought itself. Literally a regulation for our minds. So while it's an imaginary scenario, it's a real part of the human mind and subject.

So what kind of thought does thinking through a social contract argument facilitate? For Kant, it’s the thought of governors themselves – heads of state, politicians, functionaries, legislators, parliamentarians.

By focussing their minds on the fundamental questions of what brings people together in a society, leaders will create laws, regulations, and institutions for their own societies that align with the values and best interests of their own people.

As Kant puts it, they’ll write laws to which every citizen would consent if given the opportunity – just like in the image of writing the social contract in the first place.

There are some limitations to this. But I’ll get into those tomorrow.
Posted by Adam Riggio at 02:00