I'm a bit of a theatre nerd. The first long-form work of drama I ever produced was for theatre. So some of my favourite episodes of television are the bottle episodes. “Detained” was the Class bottle episode.

Just a few special effects like the classroom door floating in the blackness of no-space. The CGI shots of the transdimensional asteroids. The explosions and prop chaos during the asteroid crash and other shenanigans with a smoking asteroid. Everything else is carried on the strength of the dialogue and actors.

On those grounds of basic criticism, “Detained” delivers. Patrick Ness’ dialogue has its clunky moments as usual, but all the actors pull off some powerful, nuanced moments. The episode’s entire concept is about forcing the actors into intense literally confessional scenes. This is Doctor Who does No Exit. Literally.

warned – they are genuinely in hell. A one-room prison in a pocket beyond space and time where their only way out means confessing their closest secrets about how they feel about each other to each other. 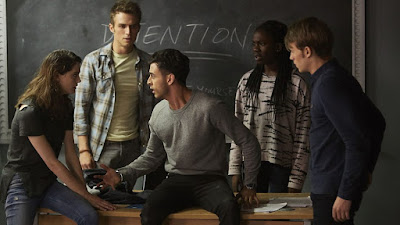 Many Kinds of Truth

So let’s get the basic premise out of the way. Quill puts the Scooby Gang in detention so they don’t mess with her while the events of the next episode are happening. A freaky asteroid smacks their classroom through the rift and knocks them into a no-space.

The asteroid turns out to be a prison for alien murderers. The only way to find out about their situation is to hold onto a piece of the asteroid and let it take you over. And when you channel the asteroid, it forces you into a confession. A suitable piece of mystical police state technology for the Whoniverse.

It isn’t just a matter of being forced to tell the truth. Truth is more complicated than just facts. Because the gang want to learn facts.

They each take their turn with the asteroid so they can learn enough facts about it and their situation to escape – they can each only handle the asteroid once before it fries their brains, the asteroid is a transdimensional prison, they’re trapped in their classroom with the consciousness of a multiple-murderer. And so on.

So far, so Doctor Who. Affordable TV budgets and high drama with cracking scripts, mad ideas, and quality actors. But since I’m doing philosophy at the same time as I’m talking about science-fiction television, I should ask – What kind of truths are we dealing with here? 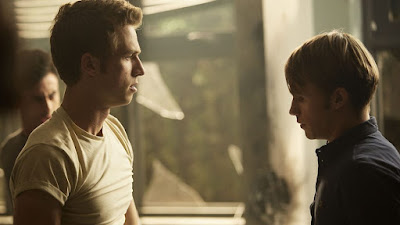 You confess so that the truth is known, because you’re compelled to say what’s true. This is why confessions are so powerful in the criminal justice – it’s literally the unfolding of truth. The burden of a secret is lost when it’s told. You don’t feel the pain of hiding anymore.

That’s Matteusz’ confession. He recalls coming out for the first time, to his dying grandmother, who knew from the start and didn’t care. The one member of his family who accepted him was the first to be told and also the first to leave. And he was left with the family who kicked him out.

That’s the same nature of his fear of Charlie, of Charlie’s alien nature, morality, capabilities. There is that deep love, but Matteusz’ fear slowly eats away at his love. Saying it lets them work it through and become closer for it. That’s the ethical confession.

A confession is also how you see the world, how you understand what’s happening to you. Tanya’s first confession is of a shameful moment, when she continued to hide the fact that – after stealing a handful of candies as a child – she had planned from the start to steal. While she told her mother that she thought the sweets were free, that at the time she’d understood it not to be stealing.

Tanya’s confession to her friends is also about how she sees the world. She confesses her belief that she isn’t truly their friend because they think of her as a kid sister and not a peer, that they’ll never understand the kind of life and challenges she faces as a black woman in Britain. 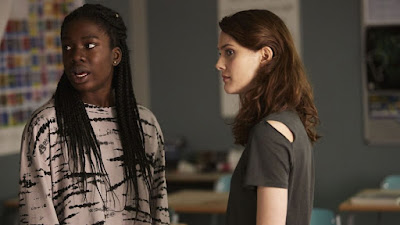 What she confesses isn’t true in a factual sense – The rest of the gang are her friends, and while they may not all (except Ram, and oddly Quill) have experienced systemic social racism, as friends they can come to understand it themselves. The bonds of solidarity she doubts are really there.

Tanya’s is an epistemic confession, an expression of her own perspective on the world, which can be mistaken or incomplete while still being true. It’s the truth of how she sees the world.

Then there is simply the factual truth. When you know something concrete about your world, and precisely. Typical for Ram, that’s his confession. He’s a stereotypical footballer again that way, always a simple soul. Saying what he thinks and doing what he wants. Heart on his sleeve no matter how hard (and badly) he tries to hide it.

Ram confessed to his father that he had an alien artificial leg. And he confessed to April that he loved her, but knew that she didn’t love him.

There it is. Behold! Check it out!

What do we learn from April? She’s a paradoxical character – Phil Sandifer is right that April’s paradoxes and subjective complexity makes her the most intriguing character on Class. But there’s more to these paradoxes. 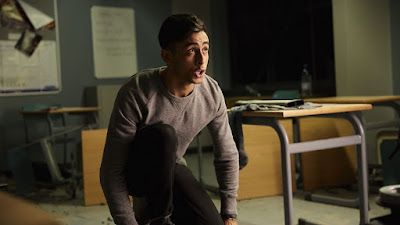 April is notable for her personal strength to deal with immense burdens and traumas like her link with the Shadowkin and her father’s attempted murder-suicide. But the show first depicted her as this cloying school keener – the only one who cares enough about the school dance to set it up, even though everybody goes.

She doesn’t express her strength on her own. In ordinary situations, she’s content to be passive and unnoticeable, even if she’s lonely or isolated. Her strength only emerges in response to these terrifying challenges. She has a paradoxically weak strength – April is only an agent when she’s reacting.

So her confessions are reactions. She remembers testifying against her father in his criminal trial after his murder-suicide attempt – expressing a terrible, painful truth because the situation itself demands it. A confession that takes immense personal strength to make, but it would never have been made if not forced to.

What forces it? In the original instance, it’s the need to redress a terrible crime – more than having broken the law, April’s father violently broke the intense ethical trust that bonds a father and his family. That situation calls April to act.

In the moment, Ram has just made a powerful confession of love and trust that she doesn’t know how to reciprocate, and might not be capable of reciprocating. A radically powerful development in a relationship of profound trust calls April to respond.

She summons all the strength she can to make the ethically best response – the consequences will be dealt with, but the response cannot be avoided.

This is a truth of justice. 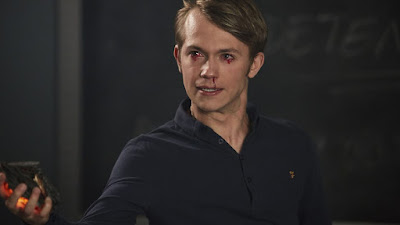 • • •
Charlie’s confession is a combination of all these. An undeniable truth whose expression unburdens a corrosive secret, pulled from him by the sheer danger of the situation and the need of those he loved.

Yet it’s also a mistake of a sort, based on the folly of his perspective – his deep guilt that thoughts alone require the same ethical culpability as the act. The Rhodian (and Kantian, and Christian) morality that the desire for a crime is indistinguishable (in pure reason, or in God’s eye, respectively) from its commission.

And like all their truths, this is left hanging. Tanya is still alienated from her friends, Ram wounded and April alone, Charlie shouldered with an otherworldly guilt, and Matteusz hoping and doubting he can handle his love’s alien nature.

There will always be consequences. And so more confessions.
Posted by Adam Riggio at 03:00