The more philosophical stuff will continue after this weekend. Today, I’m just writing a short post to add a little promotion to the Syria Film Festival – which opens tonight at the Isabel Bader Theatre at University of Toronto.

SYFF is an organization that’s grown very close to my heart since I became involved last summer. For one thing, it was my first (if still unpaying) gig in the communications field – an internship that I started a couple of months after graduating from my college program.

Though the internship’s term itself finished after the premiere film festival last November, I stayed attached to the organization. And I’m a core part of the organizing committee, though I admit that I haven’t been able to contribute quite as much as I’d like to.

Especially after getting a monstrous cold just a few days ago that knocked me out during the frenzied final preparations and promotions.

But I’ve made quite a few good friends here, and gotten involved in an organization that fits the utopian character of my political, social, and moral values. After all, SYFF is based on the notion that art, cinema, and images can help change the world. It’s a wildly unbelievable truth. 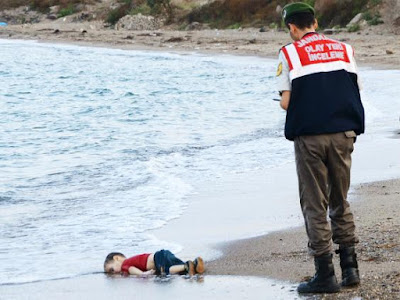 Consider the macabre image that launched the wave of Canadian support, grief, and love for Syrian people – Aylan Kurdi’s dead body washed up on a beach. I remember one committee member at the time remarking that the image would pass away within a news cycle or two.

I could tell it was different, that it had a singular and great power. I knew its power was potentially transformative for a lot of people in Canada. I was one of only two Canadian-born members of the core crew in SYFF’s first year, so maybe I had a better sense of how that image would drive people in my society.

But I’m also a film writer, and a lover of cinema. I understand the power of images. That image brought thousands of people out of refugee camps to my country where they can live in peace. That image brought a huge wave of publicity to our film festival.

In our first year, most of our films were pretty depressing. They were all documentaries – some short a couple feature-length – that followed the uprising and the war. A woman who defied her parents to join the revolution against Assad. An animated homage to the White Helmet rescue squads. Shorts about the unending limbo of life in Za’atari Refugee Camp.

I think my favourite film from SYFF 2015 was 50 Feet From Syria, a documentary about Hisham Bismar, a Syrian-American orthopaedic surgeon who travelled to a Turkish hospital just over the border. He treated refugees and performed emergency surgery on freshly wounded soldiers, revolutionaries, and civilians rushed over the border. It was unflinching in depicting the real, gory brutality of shrapnel and bombing injuries. It’s one of the greatest documentaries I’ll never watch again.

We have a few war stories in SYFF 2016, it’s true. Our Friday night feature documentary is After Spring, a powerful look at the brutal results of the 2011 democratic uprisings across the Arab world.

But we also have stories of hope. We have a film about the Syrian actor Jay Abdo, tracing his journey from being one of the most famous and respected character actors of Arab television and film, fleeing to America as a dissident, and restarting his career in American cinema.

Jay was a special guest at last year’s festival, and is returning this year to introduce and discuss his film. A few days ago, I did a detailed interview with him, which I hope to turn into several longer articles about SYFF, Jay’s journey, and a look into the world of Arab television.

I think the film I’m most proud of so far in SYFF 2016 is Syrian Eagles. It’s opening the festival tonight, and it’s the first film SYFF itself has produced. Our programming committee head – and well-experienced documentarian – Aisha Jamal directed it.

Syrian Eagles is the story of a local Toronto soccer team composed entirely of Syrian newcomers, telling their stories and their hopes in their new country. At its forefront is hope in the face of terror and war, and a new community of welcome and peace.

Art will change the world.