If you want to dig into my thoughts on the peculiar powers of the Monks, click here. Then please come back.
• • •
"The Pyramid at the End of the World" is a difficult story to get a handle on. On one hand, it’s Peter Harness’ weakest effort since he began writing for Doctor Who at the start of the Capaldi years.

I’d say the main cause of this narrative weakness is Harness’ return to the military techno-thriller tropes of his story last season. Now, "The Zygon Inva/ersion" was a stone-cold classic, and I think the biggest mistake Harness might have made with "Pyramid" is returning to that same well again.

With the required warning of

before I get into the details, this is probably the story that most closely apes the style of Michael Crichton. I’m thinking particularly of the experimental agribusiness lab sequences, a man-made* Andromeda Strain whose release would render Earth a near-lifeless world.

* I do love the touch of a character who’s so very much a Man™ almost destroying the Earth through his hungover clumsiness. Humanity nearly killed in a day, thanks to the pig-headedness of one aging dude’s refusal to admit that he can’t party like he could ten years ago.

It’s almost as though Harness’ style was built to age too fast. He’s a one-trick pony whose one trick is so complicated, it’s impressive. But even an awesome trick gets old fast if that’s all you’ve got.

Start with a gritty, almost nihilistic, aggressively masculine style of sci-fi. Gender-swap it enough, but keep all the characters’ voices just as masculine. Smash it into a symbolic expression of a controversial, practically unsolvable political issue.

Resolve the problem in language so abstract yet inspiring that the solution is inspirationally simple. But it’s still impossible in real life. The world is too much for a story to make us feel good. But the wild shifts, constant action, and perpetually intense tone amp us up so much that the simple yet impossible answer feels somehow right.

We think we’ve had some kind of insight into a universal moral truth. But recognizing such a truth does nothing to solve the real problems that the symbol made so simple.

"Kill the Moon": The Golden Age adventure of solving a complicated science problem. Smash it into a metaphor for abortion on a literally planetary scale. The solution: Every decision is a free choice, but also as momentous as to risk a whole world for it.

Yes, that is the magnitude of any decision to abort, but your decision must always be free. No power above the human race – metaphorically, a pregnant woman – can compel you one way or the other. Absolutely not. Not the law, and not a Lord.

Inspirational. And true. But knowing this truth won’t solve the real conflict. Those who can’t bear to say no will still hunt the ones who, in full knowledge, aren’t saying yes. We’re all free to choose not to take a risk in our lives. Why not a woman?

Life isn’t as simple as knowing the truth.

First It Dazzles, Then You See the Gears

I remember how I thought about "Kill the Moon" at the time. Because I just looked it up in my own archive. I found the dialogue clumsy, hokey, too cheesily technocratic. The too-simple Golden Age style that bored me even as a child was tonally incapable of metaphor.

Also this. In 2014, I just thought everybody was too busy being a stupid man to think this crazy mashup could even be conceived as a metaphor for abortion.

But you can see the same trick in "The Zygon Inva/ersion." The Manly™ genre: globetrotting action thriller, with a dash of Philip K. Dick inspired surreal doubled consciousness. James Bond and Total Recall, gender-swapped with Osgood and Clara, respectively.

So we’re definitely entertained. The profound but impossible moral truth: All conflicts can be solved if everyone involved would simply talk it through instead of killing each other.

I don’t have to tell you this doesn’t work. We all wish it would, so it tugs at our sympathies, yearnings, pain, and hopes. After all that action and crazy shit, we’re primed for an emotional shock. We love it for its truth. But knowing that inspiring counterfactual doesn’t make a truth come true!

So how does "The Pyramid at the End of the World" go? The pieces are clear, but they get a little touch twisted this time. Genres: Geopolitical military thriller, Crichton-style techno-thriller, and a gothic Independence Day.

The Great Moral Truth: All you need is love. Fuck’s sake.

Zero-dimensional collections of accents in military uniforms uselessly throw weapons around and decide to lay their conflicts aside to fight an enemy that threatens them all. It’s about as straightforward as the climactic montage of Independence Day.

The lab where the all-consuming grey goo first appears is straight out of The Andromeda Strain. The screwup is a decimal error because Doctor Who only has 45 seconds to describe any science, and Michael Crichton has 500 or more pages.

Everything’s nicely diversified. Rachel Denning endows an otherwise generic character with a splash of extra personality that enlivens her contrast to the pathetic lout Douglas. The U.N. Secretary-General is suitably not-quite Ban Ki Moon. I’m sure the others tested very well.

The Doctor is just anarchic enough. Instead of some complicated, techno-fetishist defeat of the goo, he sets it all on fire.

Then the moral comes. That perfect moral truth that real love saves us all. The Doctor gets his sight back and escapes. He pops back to Turmezistan** in the TARDIS as the Monks’ machinery is shaking apart.

The Doctor delivers the perfect speech, zipping around the room of time’s threads, explaining inspirationally beautiful gobbledegook about how “Bill’s consent was to my getting my eyesight back! So I could be free! Because she consented to you out of love, yes. But not her love for you.

“It was because I’m fantastic! Because I’m her friend and she didn’t want me to die! But blowing up in a Michael Crichton lab isn’t the only way I could die. No, she knew that I’d die if I had to watch the Earth enslaved. She consented to your invasion only so that you could fall. So she could watch me make you fall!”

Maybe Harness could have pulled it off. He would have had time for a few more drafts at least. I’m writing this the day of – I’m not polishing this for the BBC.

See, that message about the power of love pervades all the way through the Extremis trilogy so far. It’s a whole new approach to the idea of a story that puts the Doctor through a wringer. An increasingly desperate situation. But this isn’t any "Caves of Androzani" world of enemies.

Without any expectation of gain or reward, what do you have that can be a seed of ethics? The Master said it – in her twisted way, she is the Doctor’s friend. Bill says it too – even though she steps headlong into who knows what horror, she saves her friend the Doctor. 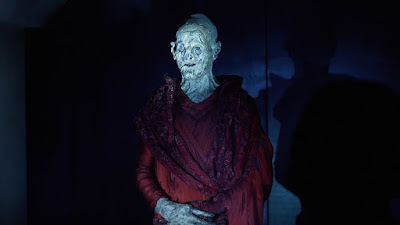 In each story, the cliffhanger completely changed the setting, as a reaction to the Doctor’s literal defeat. In the first round, the Doctor was defeated because he wasn’t truly the Doctor, but a simulation. The world had made it impossible for the Doctor to win.

The same happens here. The Monks have won, unequivocally. As Bill says in the trailer, the Monks have always won. This world where the Earth has already been conquered is where the story at last plays out.

The story doesn’t end with Harness’ contribution. So we don’t get his pat, comforting moral truth. We get the impossibility of victory.

Can the person in charge of making the impossible reality actually be Toby Whithouse? This could get weird.
• • •
Check out my previous review essays on the last Peter Capaldi season of Doctor Who.
The Pilot / The Girl With the Star in Her Eye
Smile
Thin Ice
Knock Knock
Oxygen
Extremis
Posted by Adam Riggio at 20:00