“Oxygen” is a bold story. Not just for its ending, which seems literally to have created a new kind of cliffhanger for Doctor Who. But socially, it’s bold. Brash, even.

It’s a coincidence, in part at least. When “Oxygen” was written and filmed, no one knew that it would air in the middle of an election whose likely result will put Britain on a fast track to mass poverty and servitude to a few powerful corporate actors.

I can’t say for sure how the British election will go. I can’t say for sure what the eventual result of Brexit negotiations will be. It could be that the entire process will collapse when Theresa May can’t get the perfectly sweet-spot of a deal to which she thinks she and Britain are entitled by winning a large election mandate and voting to leave the EU, respectively.

I care about Britain. On an individual level, I have many friends who are British or have immigrated there, or are studying there on an EU passport in a very precarious position. Plus, it produces Doctor Who, the TV show closest to my heart.

I’ve been exposed to British culture through its television and journalism about the country for my entire life. While I haven’t really ever had much desire to go to England, the culture’s art, ideas, and history have been deeply influential on my sense of humour and personality.

So it makes me sad to see the seeds of Britain’s economic destruction falling into place. Brexit will force the country to lurch with almost no transition time from an economy deeply integrated with the globe, to a country with hardly any trade agreements at all.

In barely a year of its exit, the government will still have managed no trade deals as an individual country to replace the massive web where it lived as an EU member. Britain will snap from a densely and multi-vectored integrated member of the global economy to a near-autarky. Its trade relationships will be on par with North Korea.

A rash judgment. But I think it’s a possibility. Given the density and complexity of negotiating any trade agreement, it’s a near-impossible task to renegotiate entirely new ones in two or three years. Britain needs an army of expert marketers / negotiators to scour the globe at breakneck speed.

Instead, they’re having an election, thinking that a stronger parliamentary majority will give them some kind of mandate to negotiate a better deal with the EU. There is no reason why the election result of a foreign country would affect the priorities of one’s own.

To Rage at Last

Britain faces a future that frightens a lot of the people in that country who’ve struggled with deeper and deeper poverty as its Tory government’s brutal austerity program choked away any possibility of a recovery from the 2008 crash. A stress-free subsistence is now nothing but a dream.

This is the Doctor’s world. In a literal sense. It’s the world into which the Doctor is beamed. Britain has always been Doctor Who’s first and primary audience. Even as the last decade has seen the show’s global success on a never-before-seen scale, Britain remains its home.

As Phil Sandifer has built the foundation of his whole career saying, Doctor Who has often been a voice of Britain – its rebellious, utopian spirit. As the tension builds in Britain’s looming disaster, the rage is breaking through the surface.

“Oxygen” is an expression of rage. Jamie Mathieson’s script is a howl of rage. The initial concept from the episode’s publicity is already a campily transparent mockery of capitalist values. The Doctor and company land in a world where even the air has become a commodity to be bought and sold.

A basic enough crime against human decency, and one central to Western politics. One of the most brutal battles in American politics right now is the Republican Party dismantling the health insurance laws and exchanges Barack Obama’s government instituted.

It’s far from a perfect system for delivering health care equitably. But without those institutions, millions will lose their health insurance, ruining their lives. Either you decline far faster without health care, or you bankrupt yourself trying to live. When health care is a commodity, universality is impossible – There’s always someone too poor.

Who would not be enraged at this?

A Price on Your Life Is Also Its Cost

The central lie of absolutist capitalism as an ideology is that the market and profit motive always promotes the most free and fair society. But when everything is open to commodification, life is horribly profaned.

Now, I’m not talking about some special aura of a being’s essential existence that’s choked away as a commodity. I’m not going the full Walter Benjamin today. Commodification profanes life because a world of total commodification kills people. The people of “Oxygen”s world measure space in breaths because they have to budget their personal oxygen use based on their income.

I don't think there’s been such a transparent condemnation of Britain and the West’s current economic problems since “The Sunmakers.” In that story, Robert Holmes described a world where service fees, charges, and taxes in a corporatized world destroyed every life but that of the officials who administered them.

Jamie Mathieson achieves the same in “Oxygen,” arguably better. Holmes’ story was limited by the semi-censorship Doctor Who faced in 1978 – After the social conservative activism campaign against the show when he and Philip Hinchcliffe were showrunners, Doctor Who had to tone down its frightening imagery. So “The Sunmakers” mostly stuck to broad parody.

Not so for “Oxygen,” as the TARDIS team and the space station’s survivors are assaulted by the shambling corpses of their co-workers and loved ones. Did I mention that their bodies have been mutilated by the total electronic shutdown of their nervous systems and long-term exposure to the vacuum of space?

No Longer a Viable Investment

Yeah, it’s good and creepy. The makeup is suitably nightmarish. And the central concept of the episode is an even more terrifying indictment of our modern capitalist attitude. I can’t explain it without warning you of

at last. So here it goes. The space station staff’s survivors, throughout the episode, think that their spacesuits are “deactivating their organic components” because of some malfunction.

But the Doctor figures out the real cause, almost inconceivable even to the characters who live in this perverse world. They’re on a mining station, stripping an asteroid of its copper ore. The problem is, their returns are dropping.

Throughout the episode, there are small hints in the dialogue that they’ve had to shut down production. There were errors, issues with their equipment, and repairs were taking a while. Their company’s artificial intelligence and algorithms declared their employees not worth the money.

They were fired. All 40 of the mining station staff were fired. Getting the sack in Mathieson’s imagined future of hyper-capitalist human society doesn’t just mean you could die. It’s literally the axe. Execution on grounds of losing your division’s profit margin.

And I thought some of the contracts I’ve signed for freelance writing and marketing gigs were bad.

It reflects a real fact about our world. Britain today has weakened its safety net terribly over the last decade of Conservative Party rule. People who lose their jobs quite often lose their unemployment benefits because, ever since David Cameron and George Osborne’s austerity regime, social welfare administrators have a mandate to remove as many people as possible from the rolls.

Getting fired or being otherwise unable to work in Britain today can often cause extreme poverty and death. Just ask Daniel Blake. 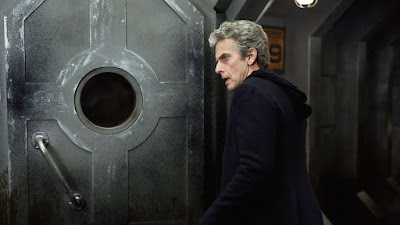 This is the world we live in now. Doctor Who has spoken directly to the indignity and torture of life as a working person in the West today. Call out the powerful. It’s what art is for.
• • •
So yeah, about that cliffhanger. Only a brief note so far – I want to see how it plays out in the next episode, which looks like another terrifying and creepy story. But it does more than simply teasing the next episode.

The last seconds of "Oxygen" showed that, after exposure to the vacuum of space in this story, the Doctor remains blind. And he isn't sure how or when it will ever heal. It completely transforms how the Doctor will have to act in the next adventure (at least).

Doctor Who's tradition of cliffhangers began when it was a more conventional serialized adventure show. The cliffhangers typically foregrounded a threat to the main characters, which is fine at a surface level.

But the best cliffhangers don't actually do this – the threat to the main cast isn't a profound form of tension. When we see names in the opening credits, we can be pretty sure they'll survive story to story. No one reading Superman will ever think Superman will ever die from a generic cliffhanger.

In such a context, a cliffhanger works best when it has nothing to do with threats to the main cast. It's about some revelation that will transform the story. "Oxygen"s cliffhanger, leading into "Extremis," is one of these radical transformations. The Doctor, at least for now, has been radically transformed in his abilities. And I hope for next week, the story takes seriously how a personality like the Doctor's deals with the sudden onset of a real disability.
• • •
Here are my previous philosophical reviews of this season of Doctor Who. I don't plan on ranking them until I see the whole season this Spring. So seven more weeks to go.

Knock Knock
Thin Ice
Smile
The Pilot / The Girl With the Star in Her Eye
Posted by Adam Riggio at 08:00