Archimedes is a part of the Western cultural imaginary about the nature of science, knowledge, and scientific power. Get me a lever long and strong enough, find me the right place to stand, and I can move the world. That’s the image.

Now, I’m about to take over as Digital Editor of Social Epistemology. So it’s not like I actually believe this is the way science and scientific knowledge actually works.

But scientific knowledge doesn’t need to understand the world from some point of perfect objectivity to do its work. The view from nowhere not only doesn’t exist, but it was never necessary in the first place.

I write this so that I can draw out of Hannah Arendt’s writing about this idea something that I can use in my own philosophical work. She talks about an “Archimedean moment” in the history of Western science, from which we realized that view from nowhere. 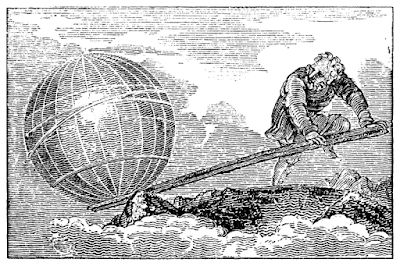 Yet I think she also understands that this “Archimedes” image doesn’t refer to scientific practice itself. Scientific practice and technological development is far more complex than the popular image of it all.

That’s where I pick up Arendt’s thread on this image of Archimedes. The popular image of science remains this ludicrous, inaccurate one of the view from nowhere. The point of pure objectivity where our knowledge is pure in its truth.

Even that popular image misunderstands Archimedes’ words,* ignoring their directly practical character. Knowledge is how he moves and changes the world, not simply understanding it in some purely abstract sense.

* I doubt Archimedes himself ever said anything precisely like that. Same with the Eureka! moment. The idea, the image, the cartoon that appears in our popular culture is most important.

No, what matters is the image of the Archimedean point or moment. The image that fixes our belief in human knowledge as aiming for pure objectivity is part of our popular culture. It isn’t true about the nature of knowledge, but it’s popularly believed to be true. We shouldn’t confuse the two.

Arendt writes about how that popular belief has informed popular attitudes about science and knowledge for centuries. She cites a philosophical explanation of Galileo’s experiments. But she could just as easily be talking about the public relations campaign of Robert Boyle and the Royal Society to keep their research from being swept up in the violence of England’s politics at the time.

I also want to keep an eye on Arendt’s explanation for what Galileo’s experiments actually did, her philosophical account of it. Copernicus’ sun-centric model of Earth’s system was conceived and used simply as a mathematical tool. It was a way to simplify planetary mathematics.

Only when Galileo made his telescopic observations of the planets did Copernicus’ model turn out to be so inconveniently true. He didn’t prove it true like a demonstration of logic. He discovered facts which established heliocentrism as a fact.

His telescopes were the long and strong levers that, in popular consciousness at least, moved the world. Which seems to be where it really counts.
Posted by Adam Riggio at 01:00