As I was reading through The Human Condition, I made quite a few notes. I always make notes when I read philosophy, of course. Most of the time, they’re pretty trippy reactions to concepts. Elaborations. Arguments. Questions. Comments. Links.

Sometimes, it’s a joke. A meaningful, significant joke. A cruel joke. Definitely a cruel joke. The worst way to have an idea go out of date.

Hannah Arendt writes, “Mankind as a whole is still very far from having reached the limit of abundance.” Chapter 16, page 124 of my English edition.

This is from the late 1950s, when human industry was kicking into its highest gear yet. This was the decade when we started pumping enough carbon gases into the atmosphere that we were kick-starting the sixth Great Extinction.

Here’s a thought that comes to me when I read this sentence of hers. Here we were, so close as a civilization to reaching the carrying capacity of our planet. Yet no one could see it.

Only 60 years after Arendt wrote The Human Condition, we were pushing up against the carrying capacity of our planet for an industrial civilization of more than seven billion people.

In 1960, the Earth’s human population had only recently passed three billion. The problem wasn’t nearly at the forefront of everyone’s mind. We all knew the danger of nuclear weapons. The Cold War loomed starkly enough that it was called the nuclear age.

Nuclear weapons no longer have that solemn dignity, as if we could control the finger of God with a big red button. Now, they’re the apocalyptic toys wielded by boy-emperors and man-children. What was humanity’s great achievement of divine wrath is now our grotesque stumble into drunken mass suicide.

Arendt could never have seen Donald Trump. If she had, she’d probably have dismissed it as a night terror. Even four years ago, the prospect of Donald Trump becoming President of the United States was an unbelievable proposition.

Humanity is dissonant when we try to tell the future. All we can do to anticipate the future is follow present situations and trends along their current dimension of progress. When we believed that every home would have an atomic oven. Or that passenger rockets would take us on trips around the world in less than an hour.

Maybe we can imagine some much more intense version of the present moment. Cyberpunk imagination brought us that.

Even when the predictions are accurate, they’re limited. Elon Musk is talking about doing rocket-based commuter flights from San Francisco to Japan in 25 minutes. But I think he just feels cheated that we never got the moon colony by now, like we all thought 60 years ago. 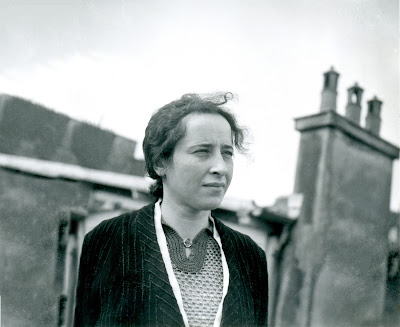 In this passage of The Human Condition where Arendt drops this line, she’s continuing her long analysis of how Western values have transformed from Polis Greece to the Atomic Age.

She can see some kind of radical transformation ramping into gear because her eye is on industrial production and the processes that enable it. Because she’s tracking the development of Western values, she has her eye on the growing frenzy of consumerism in the United States and the other free market industrialized regions.

Arendt had lived through the Second World War, and catalogued the many thresholds humanity crossed in those years. We know the most about what she wrote about its terror threshold. But she was also watching our economic thresholds.

The Second World War was the period of humanity’s most aggressive, intense, and massive industrial production yet. Fifteen years after its end, none of that industry had scaled back its powers and processes. War wasn’t eating it up – people were.

This was consumerism. The dignity of building goods to last was replaced by the relentless push to consume. Buy, wear out, and replace. That’s why my grandparents’ sewing machine could keep working for decades, but most everyday machines like that now have lifespans of a few years.

We’re supposed to throw them out and replace them. It’s the only way our industry could keep pace with the capacity we developed through total war. At the time, the buildup of consumerism was necessary – only the intense industry of the Second World War could bring human civilization back from the Great Depression.

Humanity drowns in our own shit, and does so in D&G shades.
Posted by Adam Riggio at 02:00