A story first, then some philosophy.
• • •
Sometimes, a politician hits on the right idea at a time when she can never do anything about it. Hillary Clinton had led a political life of equal parts naiveté and the most awful ethical compromises for state power.

But then she put a fundamental truth about human nature on her campaign signs – that we are stronger together. It’s as if she knew she’d go down in flames – never consciously, only as a last moment of ethical instinct from the most ancient parts of her brain.

Everything about her political career was rooted in noble, true instincts, but she and her husband both were the worst judges of which compromises were worth making. Believe deeply all your life in the power to heal racism in America, then pass the 1994 crime bill and welfare reform packages in the name of compromise across the aisle.

Newt Gingrich’s Republican Party was just as revanchist as Donald Trump’s. Gingrich just had some tact, so he could trick naive kind people into thinking that he didn’t wish we could just have Jim Crow back.

It’s the same about this mess with Uranium One blowing up on right-wing media. FOX began talking about this complex web of business deals, as if it shows the fundamental corruption of the Clintons. But to me, the centre of the story lies here.

Bill Clinton walked into a meeting with Nursultan Nasarbaev – President For Life of that bastion of liberal freedoms and government transparency Kazakhstan – while Hillary Clinton was US Secretary of State. Bill sincerely believed that he was arranging nothing more than a contribution to a public health project somewhere impoverished.

Bill and Hillary Clinton would never have imagined such a meeting as a pay-for-play. Corruption was the worst thing a powerful person connected with government could do – it would break the people’s trust in you to do the right thing by them. Surely, no leader of a country would take on such a burden solely to enrich themselves.

Nasarbaev lives in a world where every meeting is a pay-for-play, a corrupt deal to enrich yourself. Enriching yourself was the reason you joined the government.

Some people are raised believing that joining government means becoming a public servant – that you have a duty to your constituents. If you take that so much for granted that you can't conceive of people who join government for very different reasons, you should stay home. You won't be able to deal with these people. 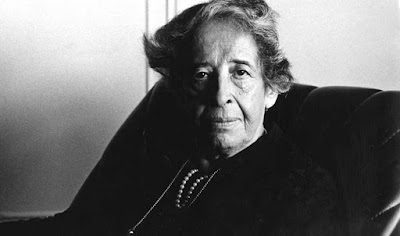 • • •
Hannah Arendt wrote about a particular concept of freedom – freedom from interference, self reliance, autarky. Freedom as the ability to turn away from our obligations.

This is a freedom we all have. But it isn’t a freedom we should want. It’s the freedom to turn away from your friends and neighbours. We’re all free to decide that we should live only to enrich ourselves.

But living that way leaves us bankrupt. Humans are fundamentally social creatures – our personalities are inherently inadequate and broken if we don’t get enough contact with other humans as infants and small children. We’re each deeply interdependent on everyone else in society for our mental and cultural health.

To have a morality that turns away from everyone else – when freedom is freedom from obligation – embraces the withering of a human organ as a great ethical good.

It sounds absolutely mad. Of course we’re stronger together than we are acting only on our own. Someone who’d gladly turn his back on everyone around him would be a monster of a person.

Don’t forget that another way of life as possible – never forget that humans are very good at making ourselves monsters.
Posted by Adam Riggio at 19:00