So I took a break from my Doctor Who blogging, just for this one episode. Next Monday 3 July, I’ll post a review of the Epic Wicked Awesome Body Horror Master Team-Up, taking both episodes as a single story.

A separate essay on World Enough and Time will probably be part of the ebook I’ll publish later in 2018 on the Peter Capaldi years. Now that the Capaldi era is closing, I can actually get a pretty good idea of what that book would look like. 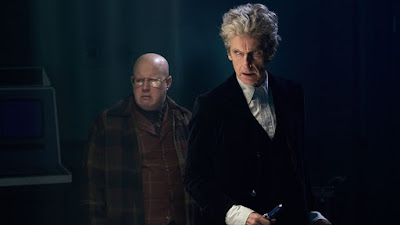 Right now, I have a general count of themes that I’m going to pursue through the Capaldi book. I’m not sure where any principle of unity would come from. I mostly just want to release a pleasantly stimulating book of essays about Doctor Who.

So what would it be about?

Sexual fluidity, for one. Russell T Davies introduced a universe of sexuality’s possibility into Doctor Who, but the TARDIS team itself was dominated by straightness throughout the Tennant and Smith years.

If the TARDIS team of the pansexual Captain Jack’s, the more open character of Rose’s first year, and the queerness of Eccleston’s Doctor had lasted more than three episodes, maybe things would have been different. As it is, we only got to explore a queer TARDIS crew in the Capaldi years.

Clara’s implicit queerness in her final season brought the idea openly into the TARDIS team again, and the main cast has doubled down on queerness through Bill.

But the regeneration of the Master into Michelle Gomez solidly slots 21st century Doctor Who into a queer narrative space. The Time Lords are now canonically and openly able to change genders casually. It’s become so taken for granted in the Capaldi era that there’s an expectation that the next Doctor will be a woman.

I do want to explore the centrality of the Master in the Capaldi years. Her power as a narrative force, the new story ideas that Steven Moffat developed for her character. The Master in these years was a destructive anarchist. She no longer thinks of amassing power and conquest – she primarily loves to tear the world down.

Right there is the centre of her redemption arc. All previous versions of the Master were variations on power-hungry schemers. They were tinpot dictators and wannabe authoritarians.

Gomez was the first Master who fully gave in to the Master’s own impulses for destruction for its own sake. She was still a delightful sadist, but was content enough to leave a trail of chaos in her wake.

Just like the trails of chaos and revolution that the Doctor leaves behind him. At this critical point of the Master’s own embrace of the thrill of anarchism and destruction, she’s ripe for an intervention.

The Doctor can train her to channel her revolutionary energy into tearing down the world to provide it new life rather than simply tearing it to pieces. He can teach her that it’s more fun that way.