Call this a correction, of a sort, to yesterday’s post. Because in the last day, I’ve learned a lot more about on the on-the-ground situation around Udoka Okafor’s mess at my old department. Mostly, I learned some of the details behind why she ended up on the wrong side of so many of my former colleagues.

So I’m going to explain how I came to believe what I believed by the time I wrote that post to go up yesterday. Call it an apology if anyone thought I blamed them for something as individuals. Because I think we can still get the most good out of Okafor's story if we take it as an expression of institutional problems that exist regardless of the intentions of people in it.

Here's how I first discovered this whole mess. A couple of friends of mine who are currently grad students at McMaster’s Philosophy Department posted a link to Brian Leiter’s blog. The post on Leiter’s blog was only a couple of sentences long, and contained a downloadable .rtf file.* 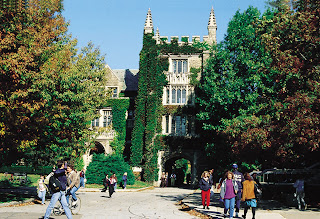 This was the first I’d heard from Sanchez Perez or Okafor, because they joined the department’s community well after I left. So I had no idea of their personalities. All I knew of Sanchez was these cruel, dismissive words filled with the messages of those opposed to the democratic movements of our time.

Having read this statement, I wanted to find out what provoked them. And this condescending short essay made me very sympathetic to the position of whoever provoked it. This was before I had read it. The response was so cruel and empty of reason that I could no longer consider its perspective reasonable.

So I read Okafor’s HuffPo piece, I found a lot of points that were true – when we were speaking on the scale of academic institutions as a whole.

Yes, the humanities’ academic canons concentrate too much on the ideas of the West alone. Yes, many prominent humanities academics abuse their institutional positions for selfish ends. Yes, universities as a whole face a financial crisis – starved of funding while overloaded with administrators, passing all the costs to students with high tuition and researchers with low pay and insecure work.

And to be frank, I’ve seen many former colleagues at McMaster – student and faculty – carry on as if all of this is somehow fine. They’d say there were problems. They’d make gestures at fighting for small improvements in the face of universal disaster.

But they’d behave – in small, innocuous, but telling ways – in the same hierarchical, conservative ways that got us in all this mess in the first place. But it’s not morally blameworthy – it’s just acting according to what your institution affords you to act. We can easily get so ingrained in a place that we can’t even conceive of how to move in other worlds. Even if those other places are more free.

When I learned that Okafor’s situation involved a collision of egos as well as a disagreement over principles and ambition, I changed my sympathies a little. There are no perfect victims, after all. But in how they chose to express themselves, both could engage sympathies well.

Maybe Okafor had more base motives than the appeal to principle. But that didn’t ultimately matter.

McMaster’s faculty aren’t villains here. At most, they’re ordinary professionals doing their best with what they’re given. Institutionally speaking, they aren’t responsible as individuals for the systems in which they’re embedded. They do literally what they can. Only what they can.

And Okafor’s piece was a clear description of the institutional issues the humanities faces. Worst case, she’s manipulating a popular view of the department for her own gain (somehow). Best case, she feels genuinely wronged by an academic situation that went south, and has reasoned how it happened from an institutional perspective.

Sanchez, stuck in the department where all this was way too personal, wrote a direct defence, as if she had truly written a direct attack. He issues a clumsy rebuttal to her points. But he doesn’t use the terms and ideas of modern activist politics to let his writing express a truth and legitimacy beyond whatever spite actually motivates her. Like she did.

He uses the insults of the reactionary conservative movement Okafor’s themes oppose, in a simple essay that’s nothing but assertion. Sanchez’s 300 words contain no reasons why her situation doesn’t truly express these righteous themes. He just asserts that she’s “crying wolf.”

You know who "cries wolf?" Insolent little children who end up getting mauled to death by predators at the end of the story. Okafor – legitimately or otherwise – effectively linked her story to the major issues facing the university system today. Sanchez responded by essentially calling her a spoiled brat and offering no counter-evidence to her narrative.

But he didn’t. He just made himself sound like a fuming, grumpy old man. Okafor made her story sound like the future realization of our dreams for a world of justice.

Not only would Okafor make an excellent lawyer, as is her ambition – she’d also be a great activist, philosopher, and public relations specialist.
Posted by Adam Riggio at 03:00