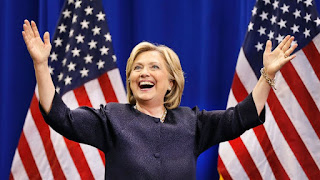 I felt like I should say something about Hillary Clinton. It’s not like I’m the only one. It’s kind of the biggest news in North America. Even bigger than that sinkhole in Ottawa.

She’s a historic candidate. She’s probably going to wipe the floor with Donald Trump, whose swaggering racism and blowhardiness* is alienating millions from the Republican Party across the United States. Hillary Clinton will quite likely be the United States’ 45th President.

The first black President will be followed by the first female President. And I dare say she’ll be more epochal than simply her gender can manage, though that’s already pretty epoch-making.

If Trump continues campaigning as he has – and I doubt that he’ll be civil for more than a few days at a time – he’ll alienate so much of the electorate from his party that Democrats will control more federal and state legislatures more securely than they have in years.

So why am I not really all that enthusiastic?

Because Hillary Clinton is a creature of establishment politics. And I don’t just mean that in the crude, pejorative sense. The sense of ‘establishment’ that makes a person see no difference between Bernie Sanders and Donald Trump. Although maybe I do mean it a little.

Because I just disagree with so much of Clinton’s traditional policy. I consider it bad for the country, and for the global economy, and for global peace. Here’s one example.

Her willingness to embroil American military obligations further in the wars of the Middle East can all too easily deepen her country’s and her people’s involvement in that quagmire. And American military might does more harm than good in that region.

America’s alliances are completely fucked in terms of their potential for genuine good in the region too, featuring a generations-old link with one of the most notorious human rights abusers in the world: Saudi Arabia.

At the end of the day, Clinton’s economic policies are largely just the same old crap that caused the last decade of economic crisis and stagnation in the first place. There’s far too much dependence on a financial industry that doesn’t actually produce wealth that gets to people.

The biggest patrons of Hillary Clinton in the business world are also regular clients of Mossack Fonseca and other firms like them, whose business it is to sequester wealth from people who actually need it.

Yeah, I would have liked Bernie Sanders to become the nominee. Although I used to believe that he had the best chance of stopping Trump from destroying American democracy, I now believe that’s actually Clinton. Trump simply can’t handle tough women refusing to take his shit. When they’re on a debate stage together, she’ll crush him between her fingers and I’ll love watching every minute of it.

And Bernie Sanders did run the best campaign since Obama 2008. He began as a wacky fringe candidate who no one thought would win any primary but a few in New England.

And Sanders is absolutely right that the American economy needs to change to re-emphasize material manufacturing and the community productivity of the knowledge economy instead of legalized billion-dollar gambling and sharing economy bullshit. And he has a track record of getting that productivity rolling, as you can see in his revitalization of Burlington VT’s downtown.

But Clinton and many on her side in her party can also easily be bought. For example, her most high-profile booster – Democratic National Committee chair Debbie Wasserman-Schultz – is pushing legislation to shield the payday loan industry from the consumer protection board her own party’s President Obama created.

I’m going to have a lot of critical things to say about Hillary Clinton when she’s President. As will many people on the progressive side of politics. She is, as this campaign proved, capable of listening to those people, even though she isn’t one of them.

So congratulations. I hope I can keep saying it.
Posted by Adam Riggio at 03:00