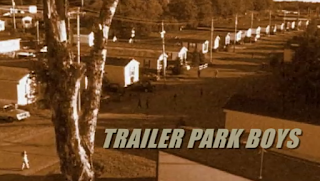 Trailer Park Boys isn’t just some weird little piece of television loved in Canada. We aren’t dealing with any King of Kensington small-time shit here. I remember when the most visible Canadian comedy show that wasn’t a CBC political sketch show was Dog House. You know the one? With the St Bernard dog who got his mind switched with a cop? Starring the kid gunfighter from Unforgiven? Doesn’t describing that show make you want to go watch Unforgiven instead? I know I do. 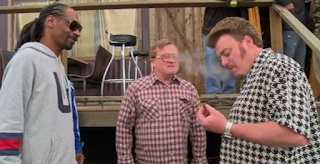 But Snoop Dogg just showed up in Sunnyvale with Doug Benson and Roseanne’s ex-husband. Let's be accurate here. Julian invented Moneyvale last episode as a casino, and he marketed it to folks just like the people in his own community and in the surrounding Dartmouth municipality.* These are clients far beyond what he’s prepared to deal with, and you can tell when you watch him try to sweet-talk Snoop and Doug. The biggest money.

* We all know people from Halifax proper are too stuck-up to party in Sunnyvale. 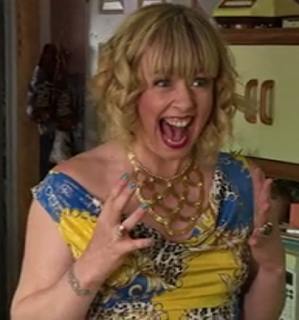 More here is going on than just a visit from the richest and most famous partiers Sunnyvale’s ever seen. This is the entire plane of Sunnyvale’s existence turning itself inside out. Snoop, Doug, and especially fucking Tom – they’re Trailer Park Boys fans. They aren’t there for Moneyvale. They’re there to hang out with Julian, Ricky, Bubbles, and the rest of the gang.

No matter how many times Ricky might lose his temper at “these fucking idiots with their cameras!” showing up at the park again, it’s easy when you watch Trailer Park Boys to think that this is only a television show for you. You’d easily be forgiven for making that mistake. Back when Trailer Park Boys started its run, it was one of the only television comedies shot with handheld cinematography, in the style of an anthropological documentary. It was basically just them and Ricky Gervais’ Office, which was still a pretty cult property at the time. It would be another three years before the American office became a huge hit and everyone was ripping off Michael Schur.

But think about the idea hidden at the heart of the faux-documentary format. Trailer Park Boys, the show we all watch, is a fictional television series that was first made by Canada’s Showcase cable channel, and is now made by Netflix. Its cinematography is in the style of handheld vérité, a style that implies that it’s filmed on-site, with real people acting as they naturally do. Our own interaction with Trailer Park Boys as an audience – the camera – implies that Sunnyvale is a real community outside Dartmouth. The show’s own camera, our eye on Sunnyvale, tells us that the camera is really in a community called Sunnyvale, and that we’re watching the edited adventures of its residents. 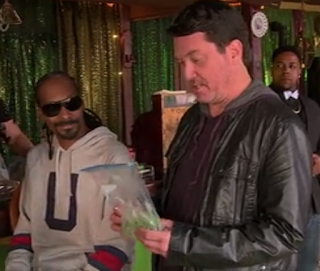 Snoop Dogg, Doug Benson, and the sidekick from True Lies are real people who work in the entertainment industry. They all love watching Trailer Park Boys. If they got word that the community was open as a casino and entertainment park for people to visit, they’d get a crew together and go. It’s the Sunnyvale Reality Tour,** the Sunnyvale Experience. And now we’re watching the documentary crew that brings us our weeks and months in the life of Sunnyvale record Snoop visit the town with his buddies Doug Benson and his Soul Plane co-star.

But Trailer Park Boys is a fictional television show. Ricky, Julian, Bubbles, and the rest of them are all actors. I’ve met John Paul Tremblay when he and I were in St John’s Newfoundland at the same time last August. Julian is a character he plays, and he is a real actor and television producer from Halifax. My girlfriend and I were drinking on the outdoor deck that’s shared between Roxxy’s, Distortion, the Bull & Barrel, and whatever bar has taken over what used to be CBTG’s. The deck isn’t licensed, but everyone drinks out there anyway and no one cares. So I go to the Bull to use the bathroom – it’s the only bar that never charges cover – and there’s Julian surrounded by a sea of fans, drinking. 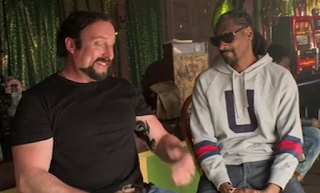 So we chat, I tell him how much I loved season nine, and he tells me that he’s really proud of the work they’ve done on season ten. He’s wearing a tight sweater and a baseball cap, and perfectly in character as Julian. John Paul takes a picture with me and my girlfriend, we shake hands, he moves on to the next group of fans who want to buy him beer.

A few days later, we saw him with his wife and kids at the Regatta – a giant county fair that occupies an entire lakeshore in the east end of old St John’s, which shuts down the entire city for a day every August. He was wearing a tank top and sunglasses, looking irritated to all hell pushing around a baby carriage and hauling toddlers around. I knew, looking at that face, that he would respond to the next call of “Hey Julian!” with the angriest “FUCKOFF!!!!” I have ever heard. Or else just punch them in the face. 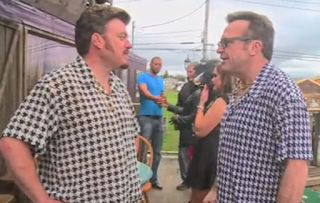 He was very much John Paul that afternoon.

Probably, he’d been surrounded by fans just as obnoxious (if not even more so) than that fat dork who I think I saw on an old Sons of Anarchy episode. He hounds everyone in Sunnyvale like an indulgent superfan with too much money to spend. He’s an open and enthusiastic poverty fetishist, loving every minute of hanging out with Bubbles in his shack that’s barely above a shantytown hovel. He darts from person to person in Sunnyvale like they’re a roadside attraction there to dance for passers-by in exchange for some loose change. He watches a documentary series about the lives of eastern Canadian trailer trash, real people with real lives filmed, edited, and broadcast for his amusement. And visits Sunnyvale to mock these people’s real lives, as if they were Disney mascots or actors in a theme park. 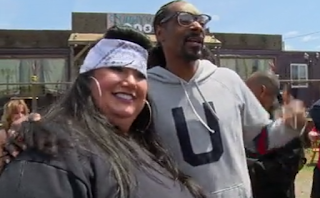 The celebrities’ presence reduces everything in Up In Smoke to a cheap joke at the expense of real people’s lives. When Barb, Donna, and Candy come to the town to stare down Julian, the confrontation between Candy and Randy becomes a joke. And it’s a deadly serious situation – this is Randy’s chance for vengeance against the women who raped him in the last episode. This is something we should be aware of when we watch this scene. Randy is squaring off against his rapist in front of the entire town of Sunnyvale. 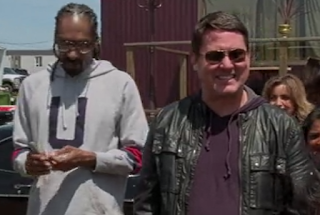 And the celebrities make a mockery of this intensely serious moment, with Snoop taking bets on it like it was a cockfight. The attention of the local media only demeans Randy’s shot at redemption even more, taking all of the cameras away from the fight itself – which we barely see – and putting it all on Snoop Dogg charming the locals.

Yet it also redeems Randy at the same time. Because Randy loses that fight. He gets his ass kicked. But thanks to Snoop, Doug, and that other guy,*** it doesn’t turn out to be a moment of traumatizing, brutal humiliation. It’s a cartoon cockfight with a giant mega-butch lesbian. Tom’s jokes about banging fat women land harder than any of Randy’s punches. Snoop, Doug, and Tom have turned this deadly serious situation of Barb’s assault on Sunnyvale into a joke. They’ve been defanged, at least for this moment, and lost their power. 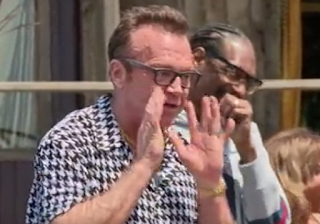 And when Lucy finally explodes on Julian over the missing money for Trinity’s wedding? And the fight threatens to break up the Boys’ entire lifelong friendship? Tom steps in and fronts the cash right away. “I’ve spent literally millions of dollars on weddings! What’s a thousand?” He does it simply because of a simple truth – it’s not worth ruining a whole friendship over money. These real people from one of the most morally brutal places in the West – Hollywood – have come to Sunnyvale for the sake of exploiting it. Instead, they ended up using their mastery of the media and comparatively huge material wealth to heal friendships and defang the powerful and violent.

Our world has smashed into Sunnyvale. Sunnyvale has become our world. Its power to turn even the most serious situation into a ridiculous, joyful laugh has become our power. Snoop, Doug, and Tom gained it just from spending a few hours in Sunnyvale, as Sunnyvale itself was starting to lose it. Villains aren’t laid low through violence, they’re mocked to death and laughed at until their weapons won’t work anymore. Joy conquers hate. If Snoop Dogg could do it after just a quick visit to Sunnyvale, why couldn’t we do it when we’ve visited Sunnyvale through our televisions for 15 years?

Of course, we all know that they’re just playing comic versions of themselves on a television show, right?
• • •
Sunnyvale is already going to be a hell of a project, but your monthly support of my weekly posts can make it even bigger and better. Sponsor the project on Patreon to earn rewards and contribute ideas for posts and supplementary material. Check out the full index of entries at my introduction to the project.
Posted by Adam Riggio at 18:00