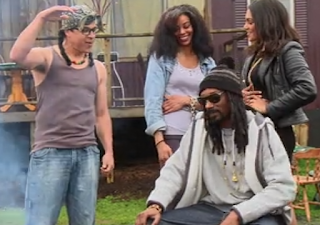 This is a transitional episode. Watching it, there’s an odd feeling hanging over the whole affair that something very strange is going to happen. But not yet. Until then, it’s mostly just an entertaining mess. Snoop is enjoying himself in a relaxing, weed-fuelled rural getaway. Doug is wonderfully high, but badly needs some kind of food that doesn’t have weed baked into it. Tom is enjoying his immersive Sunnyvale experience with his idols Ricky and Bubbles. Bubbles is getting ready for his show at the Legion Hall as the Super Bling Cowboy, which seems to be a better country-rap persona than Buck 65 could ever figure out. 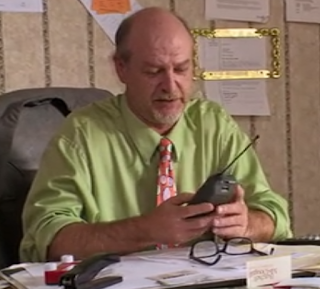 Barb herself is absent. All we see of this plot is a brief meeting with Steinberg where we, as viewers of this episode of Trailer Park Boys can totally tell that he’s hosing Julian for all the money he can squeeze out of those pecs. All Steinberg does is preface every answer to Julian’s request that he actually do something with a demand for more and more money. He runs his law office out of his run-down house. His sign has letters missing. He uses a cell phone that looks to be vintage 1998. Why does Julian think he can trust this man to do what he says he will? Is an alleged law degree all it takes to pull the wool over his eyes?

This is a transitional episode, but it’s filled with little moments of ethical and moral insight. Not all of this is about what’s right. Doug’s quest for food leads him to put some moves on J-Roc’s wife Marcia, who’ll betray him by season’s end to join the life of rich and famous stoner comedians. The most egregious is Tom’s Indecent Proposal moment to have sex with Lucy for $10,000. 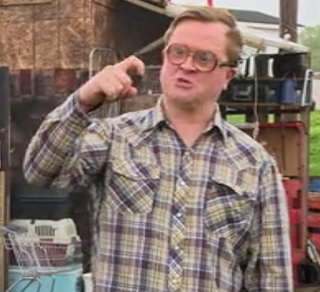 Now, this is also probably the funniest sequence of the whole episode. I know the “All we wanna do is smoke and fuck some hoes” song is the climactic centrepiece of probably the whole season, and we’ll get to that in a minute. But if I can speak as an individual watching this show and not as a philosophical commentator – the sequence of seeing Lucy’s fee shrink by commission again and again made me laugh out loud more than anything else in the episode.

Well, that’s not quite true. I actually laughed louder in the fight scene when everyone finds out about everybody else’s cuts. 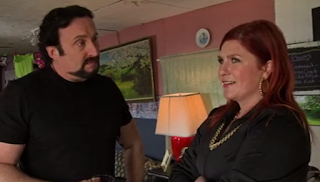 The whole sequence is this greasy blur of friendship and moneymaking. I mean, Julian’s cut is unreasonable by pretty much any measure. It’s a sign that, despite his ethical redemption at the end of “Up In Smoke,” he’s still too focussed on making money to foresee all the effects of what he’s done. He can’t see that Steinberg is milking him. He takes such a huge cut of what should be Lucy’s fee that it’s ridiculous. And when it all comes out, he and Sarah both end up getting nothing. Julian is still unmoored. 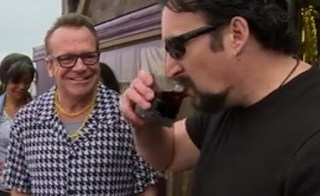 Actually, let’s look for a moment at Sarah in this episode. Because we haven’t really had much to see of her all through this season. “Super Bling Cowboy” is the first episode where Sarah’s played any really substantial role. And her role is as pimp. A much better pimp than Julian knows how to be. All Julian can do with Tom’s request to bang Lucy is deal with him, then farm out the job of actually convincing Lucy to do it. Sarah’s the one who’s actually effective, making Lucy actually consider the idea. Mind you, she also knows that it’ll make Ricky explode. 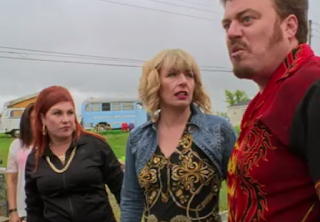 And in that crazy huge fight over Tom’s Indecent Proposal, Sarah plays a very devious role. She’s the catalyst. She adds enough extra spark to set Ricky boiling over from upset to pissed to royally raging. Just a few extra words to emphasize that, yes, Julian was pimping out his life partner. Never said anything about how she was the one to do all the work of pimping out Lucy. No, it’s all Julian’s fault.

It’s an elegant moment for Sarah, which I’m sad we never really see again this season. And it comes pretty late in the season anyway. There really could have been so much more. 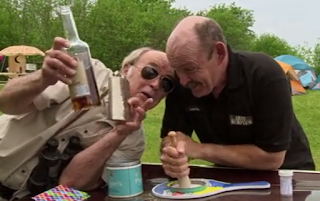 What we get more of in this episode is the catastrophic collapse of Jim Lahey, played for the zaniest over-the-top laughs you can imagine. Jim gets comatose drunk with Leslie as the ex-Private adds a few extra mystery pharmaceuticals to their whiskey cocktail. Leslie’s dedication is single-minded – about what, it isn’t really all that clear. But we know from the ending of the last episode that there are guns involved. And Barb’s ultimatum hangs over them. 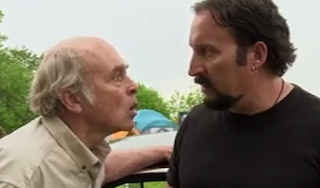 Jim came to Leslie for help because he was desperate, because there seemed no other way to escape Barb’s menace. Barb herself isn’t in this episode, but her presence hangs like a shadow flickering around the edges of the story. It’s why Julian sees Steinberg, to hold off Barb’s lawsuit, why he remains desperate for more money, to the detriment of his own intelligence. It’s why Jim and Leslie are trying to figure out a way back into Sunnyvale. 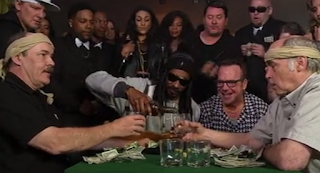 Well, Jim isn’t really trying to figure it out. “The liquor will figure it out!” That’s a bizarre, but inspiring faith in providence. Jim will drink and his drinking will lead him to a solution to his problem of how to get back to the trailer park. Providence answers – Snoop and Tom want to see Jim dance with the liquor, so Julian goes to get him. It’s not in Jim’s control, but the liquor brings him back to the park. Granted, they end up in a freaky replay of The Deer Hunter’s Russian roulette scene with disabling quantities of liquor. But they’re still back in the park, simply from trusting the liquor. 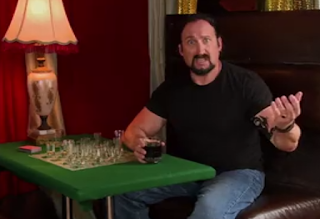 Maybe Julian could learn something from Jim about trusting faith, since every time he’s tried to take purposeful control of a situation this season, it’s blown up in his face. Julian’s need to control has ruined his ability to actually control his life and his plans. But Jim’s faith in providence has taken him exactly where he wants to be.

Ricky has a similar faith in providence. You can see it when he won’t promise Bubbles that he’ll make the show. He can say he’ll try, but that real life is complicated and he can’t guarantee that he’ll actually, with 100% certainty, make it to the Legion Hall show. But even though Ricky steps back from control over his messy, increasingly weird life, he actually does make the show, along with Snoop Dogg, Tom, Doug, Julian, J-Roc, MC Flurry, and the whole rest of the Sunnyvale crew. Going to see Bubbles play is what breaks up their fight. 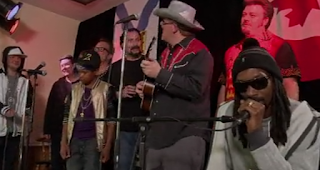 That Sunnyvale fam jam – “All we wanna do is smoke and fuck some hoes!” – is the moment of joy where all the heated arguments over Julian’s barely competent (and Sarah-sabotaged) pimping job melt away. Instead, Snoop helps Bubbles win the open mike contest, humiliates the boys who bullied him back at the start of the season, and provides once again the ethical voice of Sunnyvale. These are Sunnyvale’s values – you support your friends and family, and love them. That’s the path of joy, the foundation and cement of real community.
• • •
Sunnyvale Psychochronography will work episode by episode (movies included) through the entire Trailer Park Boys in search of the utopian vision that lies underneath it all. Check out the full index of episodes so far and an introduction to the project here. You can also support Sunnyvale through my Patreon, which will let you join the search itself through commissioning special essays and other content.
Posted by Adam Riggio at 04:00