I don’t really think a lot about Zizek. His work isn’t a major influence on my thought. The post-Lacanian style of writing is not something I want my philosophical work to pursue. A central animating idea of this thought is that all phenomena in our experience have a psychological/cultural element as a mediator. I believe that’s basically true, but I think that there are other ways of using philosophy to understand society than probing the nature of that mediation. There are forces in the world beyond mediation itself, and mediation doesn’t falsify what we come to know through it. My sight can never escape the architecture of my eyes, because my eyes are the means of my sight. But I still see the world.

That was a brief denunciation of Zizek, done so briefly that it would never pass muster as a scholarly publication, at least not as that paragraph. A flicker of what, in the university community is called impostor syndrome, the psycho-pathology that nothing you write will be of an acceptable standard to establish anything like a respectable career. Yet I have also found the perfect cure for impostor syndrome. Whenever you find yourself thinking this way, interrupt yourself with the declaration, held with absolute conviction, that you are having an episode of impostor syndrome and you really don’t have the time to be messing around with psycho-pathologies. I sometimes think, for a joke, if that’s really all psychoanalysis is: simply convincing someone that you don’t have to think in the destructive way you have been. “Seriously? You’re on about this again? Didn’t you listen to me last time when I said these were bad thoughts?”

I began to doubt myself as I described how I composed the first paragraph of this post. Perhaps all self-consciousness comes to us as a moment of doubt, a moment (maybe spontaneous?) where we stop taking our experience for granted. That was Descartes’ insight, and the content of the first philosophy class I ever had. Over that term, I became enthused enough about philosophy to spend my own money on philosophy books. That was how I came to own my first book by Zizek.

I didn’t do much research before buying it, as I do today when every book of philosophy is a potential element for one of my own creative projects. Then, I just wanted to read more philosophy, and was plucking things at random. I bought my first Zizek book because the cover design was brilliant, a bright red painting of Josef Stalin relaxing in a comfy chair, a red square on a grey background. Also in that grey background in a thin, impactful, dignified serif, was the title, Did Somebody Say Totalitarianism?, and the author’s name. I liked it.

That’s actually all I can remember. Such was my philosophical immaturity, I don’t even think I took notes. I can’t even reflect today on my first ever thoughts on reading Zizek. They’re lost to my memory, the most terrible mediator of our knowledge because it’s the most horrifying experience as it breaks down. Bergson wrote that our entire history remains a part of us, so my past (including my first thoughts reading that book) is just as much a part of me as my skeleton. Memory is the faculty of sorting through our pasts for the background knowledge we subconsciously need for practical action in the present world. So Alzheimer’s disease would in a literal sense be losing knowledge of oneself. Unable to sort through your history, your history would no longer practically exist.

Thankfully, I am no longer writing like myself, despite that unfortunate break discussing a trip to the Chapters philosophy section. It’s a serious problem incorporating that into this experimental rabbit hole of self-reflection, this momentary artistic ejaculation (What parody of the Freudian tradition refuses to include a dick joke? Certainly not this one) making myself into a funhouse mirror Zizek in this free jam of a weekend blog entry. Perhaps if I include a discussion of my own careful reflection on what I have written, skills that I have already noticed improving as I ease into my part-time job as an editor. The composition of a blog, even one with a relatively small readership like this, should basically be careful. It is, after all, a public space with a long memory named Google that will not fail anytime soon. Everything I write here is part of my public image as a writer. If the growing media literacy of my culture is worth anything, I am glad we can all understand the degree to which all of our identities have always included a little PR. If he teaches us anything, it’s this.

He has had a remarkably successful career as an intellectual celebrity. Zizek may not be everyone’s favourite (I know some achingly dull Richard Dawkins fans), but he’s certainly the most vigorously entertaining. For all that he may be denounced as a philosophy clown,* we should still give him respect as someone who is popularizing a discipline that isn’t always seen as the most worldly or relevant. Michèle Lamont, the Harvard sociologist, has studied philosophy’s growing intellectual isolation from other disciplines. Intellectual isolation is already too close to public irrelevance for my liking.

* This is an actual phrase I have heard used to describe him. Three years ago, I was at a conference in Switzerland, where I met the only Slovene academic I have yet known personally. When I asked him his opinion of Zizek, he laughed, and ultimately said that few in Slovenia took him seriously, especially after his cartoonish run for President of that nation. I don’t think I was the first to ask him that question.

Yet I can understand the public distaste for him. He clearly is, in many ways, a dirty old man with money. But he has become a world-famous author, and for all the ridiculousness of his character, he is a highly respected scholar, still taken seriously in academic circles. He is an expert in his field who writes books that appeal to a wide audience. For the sheer sake of there being variety in the world, I am glad he exists. There is no one like Zizek. I hope there never will be again.

Because the pressure of mediation is endless, its presence inescapable. Zizek does the detail work on the process of mediation. I know enough about its basic framework to get other projects done. There is nothing inherently political about the study of mediation, no matter how much Marxism appears in his writings, or how inherently political the concepts of an ideology are. No matter the substance of the ideology that mediates our knowledge of the world, we all know where interests lie in a capitalist system: with the desire not to starve. This is different from the motivation of socialist stereotypes: the desire for no one to starve. The latter is focussed on the group, and the former on the individual. No modern liberal would dispute that capitalist democracy is founded on enlightened self-interest.

Perhaps this is why there is such popular distaste for rhetoric, at least among the community of young philosophers, which was my community ten years ago when I bought a book of Zizek’s because I liked the cover. It carries with it the contemporary stink of PR. It would take an immense task of rhetoric to convince an entire culture that it thinks according to timeless virtues of universal growth and flourishing through enlightened self-interest. To remind people that you can reduce hundreds of years of philosophical development and discourse to a single aphorism as “Self-interest is the simple desire not to starve to death!” reminds them of a sort of hypocrisy. If humanity is a creature that can create itself, then we will always be hypocrites covering up the emptiness inside ourselves. Our very cultures and identities are acts of PR that we can’t help but believe in. And we wouldn’t even notice this emptiness if we just focussed on our daily tasks of avoiding starvation, as so many animals do.

Our self-consciousness, the structure of which is the central question of Zizek’s philosophy, makes us very different from most other animals, but it is a natural property. Besides many other species being able to think self-consciously, the simple fact that we are products of organic evolution makes us natural. This is at the heart of my ecophilosophy project, the notion that humanity is entirely natural, including our uncanny ability to build technology, culture, and art, phenomena that are like nothing in nature. Until now, of course, that we have built them.

Zizek doesn’t believe that humans are inherently and completely a creation of nature, and this is where we part company. But there are other aspects of his thought that will be important to me again. After all, the utopias project will involve a philosophical analysis of totalitarian concepts and political cultures. It will also explore, obviously, ideas of an ideal future to create or past to resurrect, and of the total revolution in thinking and living required to perfect society.

Well, he just released a book last year on how we think about world-shattering transformations, the kind of transformations that are often mythologized to bring about a utopia. I already have an epub version. He could be important to the project, but I don’t think he’ll be foundational. Zizek and I disagree on too many other fundamental philosophical issues. Not that I think he’s ever wrong to focus on them; we just want to explore in different directions. I’ll say hi now and then. Maybe one day, he’ll notice me enough to wave. That would be nice.

So the post ends with another moment of excessive self-consciousness and sincerity. The meta-commentary is decades old, a basic trope of a postmodernism that’s already out of date. But the sincerity is, I think, a new innovation in my culture. You see, I can do a killer impression of Zizek’s voice and mannerisms. I even thought of preparing an entire talk that I would deliver as a parody figure, Slovaj Zezzik, to lampoon the locquatious Lacanian excesses of his language, the wormholes of his ironies, and the funhouse mirrors of his own self-conscious reflections of ideology on man (must it always be man?) and man on ideology.

But I don't want to give that talk anymore, because I think it would be cruel. Words are powerful things, almost magic. At least the power of contemporary public relations can make them seem like magic, appear to do what magic claimed, change the world by thoughts alone. I am even careful with my words in this blog post, only mentioning Zizek’s name once in every paragraph. It is almost an incantation. There is an old myth in Judaism that a person’s name works something like an incantation, a GPS tag broadcasting your location to God. That’s why Jews consider it bad luck to name a landmark after someone while they’re still alive. It messes up the signal.

Zizek is many things, and he’s certainly fun. I look forward to reading him again soon. 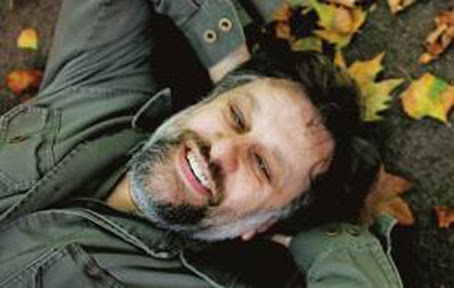