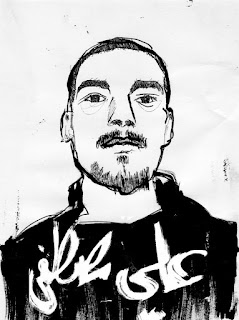 This weekend, I spoke at a memorial for the photojournalist Ali Mustafa. He was a Canadian killed in Syria, travelling with the White Helmet paramedic brigades documenting their dangerous activity in Aleppo.

He died at the age of 30 in a March 2014 barrel bomb attack on the city by the Syrian government.

I was speaking on behalf of the Syria Film Festival, where I’m communications manager. It’s a volunteer position I’ve held since the first festival in November this year. We included, during that festival, a small exhibition of Ali’s photos, along with a poster introducing his work.

Yet there I was giving a speech at a memorial for a man I didn’t know. And his mission in life – freelance photojournalism in the middle of brutal crackdowns on the Arab world’s democratic revolutions – is something beyond what I could conceive of myself ever being able to imagine myself doing.

He feels like a very different kind of person than me.

We broadcast video of my memorial speech on Periscope, but I’m not sure yet if it’s been recorded. I improvised a lot of what I said from notes, but here’s my reconstruction of my own speech. After introducing my role in the Syria Film Festival and the festival’s work so far promoting and memorializing Ali’s life and work, I reflected on how;

“The Syria Film Festival wouldn’t exist without the bravery of people like Ali Mustafa. People who pick up a camera or some other kind of art-making equipment and make some kind of art, some kind of record of what happened in the cities of Syria, in the public squares of Cairo.
“And I can understand why someone who lived in Aleppo would join and document the demonstrations against Assad and the civil war that followed. I understand why an Egyptian would go to Tahrir Square with a camera. It’s their country. Their home.
“It's not my home. To consider taking on that kind of danger, such a mission? I’d ask myself, ‘What? Doesn’t anybody in Aleppo have a camera? Oh, you’re going? That’s great. I’m happy for you . . . Stay safe, stay safe. I’ll feed your cat while you’re gone.’
“We owe an ethical debt to Ali and everyone like him. Their bravery isn’t my bravery. I don’t even have to be brave. I live in a democratic country, and I have all my life. I don’t have to be brave to say that I think everyone should live in a democratic country, and be free from violence, poverty, and war. I've been fortunate to live in a democratic country, in relative freedom, and at peace. It’s easy for me to be an idealist.
“I noticed one of the quotes from Ali, from his Twitter account, that's hanging on the walls here, and I wanted to talk about it, even though I've already prepared my remarks. I planned well ahead – I wrote them yesterday.
“He writes, ‘I feel sorry for all the idealists, purists, dreamers of the world; those who never bend, but easily break. This world was not made for you. In the end, it will devour you whole.’
“I don't know if Ali Mustafa considered himself that kind of idealist. I know I try to be. For now I can only stand in awe of someone like Ali. Maybe one day, I’ll understand it.”

The next Syria Film Festival is this November, opening at the Isabel Theatre Nov 6, then at Jackman Hall in the Art Gallery of Ontario for the rest of the weekend. Other screenings throughout the year.