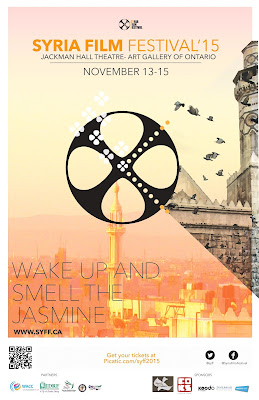 The Syria Film Festival opens today at the Art Gallery of Ontario in Toronto. It's the culmination of the internship I've worked since the end of July, a project that's been incredibly fulfilling to me in what has otherwise been an incredibly stressful time in my life.

There has never been such a film festival in Canada before, celebrating artistic voices throughout the Syrian diaspora.* It even includes a short film called Diaspora. The films of SYFF are about Syria, produced by or in collaboration with Syrians, and the organizers aim for the film festival to express the voices of ordinary Syrians.

* Well, there was a Syria Film Festival organized in Toronto in 1995, but that was on behalf of Hafez Assad, not the people of Syria.

Word that the Trudeau government will facilitate 25,000 refugees from the war in Syria and Iraq to land in Canada in the next few months is wonderful. I wish that was all we needed, and all the people of Syria needed.

It makes sense for Canadians to consider this good news, a sign of the country embracing its humanitarian traditions after the casual universal cruelty of the Harper years. But there’s still a lot of work to do if we want to build firm trust between the Syrian refugee community and the wider Canadian population.

Some already fear that refugees are liars. I've come across this in the rapidly deleted comments of racist abuse that the SYFF Facebook page receives every now and then. Twitter feeds like EU Militia Watch stoke public fears that every new arrival from a war zone is a militant terrorist, a violent radical coming to Canada solely to infiltrate, kill, and destroy.

The Syria Film Festival is an antidote to that fear and hostility. One of our slogans is, “Hear the stories behind the numbers.” We all hear reports of 12-million internally displaced, 9-million having fled outside Syria, 150,000 asylum-seekers in the EU. But those reports of statistics are easy to dismiss, because numbers rarely tell who these people actually are.

They are fathers, children, grandmothers, young professionals. Maybe they were part of the uprising against Assad. Maybe not, and they’re simply fleeing bombs and rockets.

When we want to describe someone’s character, the best way is to tell a story about them. Art reminds us of another’s humanity. The Syria Film Festival offers its audience several such stories.

There’s the story of a young woman who feels herself compelled, against her and her family’s own better judgment, to join the street protests against Assad. That’s Morning Fears, Night Chants.

There’s the animated story of the Civil Defence Volunteers, the brigades of volunteer paramedics who are the first to rush into buildings where missiles and barrel bombs have just fallen. That’s Goal to Syria.

There’s the 40-minute documentary 50 Feet From Syria, following two weeks of Syrian-American doctor Hisham Bismar’s time at a field hospital just over the Turkish side of the border. It is unsparing in its details of the suffering and horrifying injuries that the Syrian war visits on its people.

Syria Film Festival is also proud to be the Canadian premiere of this Oscar-shortlisted documentary short.

These are just a few films at the festival. While our full program is fantastic, it’s still nowhere near a complete picture of the human stories that emerge from the crucible of this Third World War. That would take millions of stories. But it’s a start.
Posted by Adam Riggio at 04:00